The southwest is a diverse and beautiful region of the UK with something for everybody: historic cities, areas of outstanding natural beauty, a vibrant music and cultural scene, beaches, moors, hill-waking, waterfalls, caves and national parks, UNESCO sites galore, traditional crafts and food... there really is something for everyone.

As the capital of the region, Bristol is very well-connected within the southwest; it has its own international airport, bus station and two national train stations as well as many smaller local train stations connecting various neighbourhoods to the rail network. This means it's very easy to get around, and while there are plenty of things to do within Bristol, it means you can also make the most of your stay and tick as many daytrips off of your to do list as possible.

Here are some of our best recommendations for day trips from Bristol:

We are very lucky to have the UNESCO city of Bath on our doorstep: famed for and named after the Roman-built baths, the city is only 11 minutes from Bristol on the train and a must-visit while you are studying in Bristol. The city’s Bath’s stunning Georgian architecture has actually featured frequently in film and TV – you might even recognise the Royal Crescent from recent Netflix series ‘Bridgerton’! We recommend stopping for a delicious afternoon tea on the Pulteney Bridge.

Journey: 11 minutes on the train from Bristol Temple Meads; you can also catch the X39 bus from the coach station or city centre which takes just under an hour. 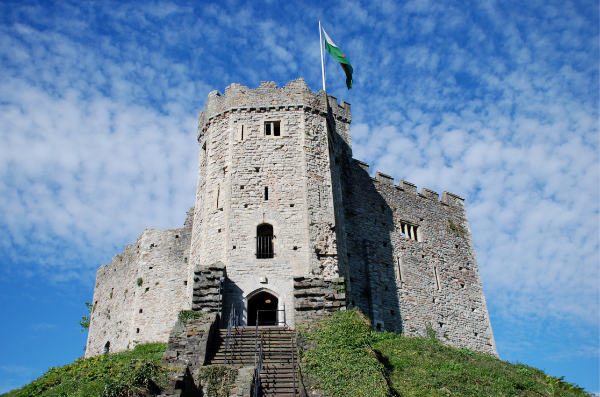 Did you know, you can travel 40mins from Bristol by train and reach another country?! Cardiff is the capital city of Wales, just the other side of the Severn Estuary. Cardiff Castle is one of our favourite places to visit, with 200 years of history to explore right in the heart of the city. You can also explore the National Musuem and St Fagans museum absolutely free, and not far from the centre you’ll also find the modern, redeveloped Cardiff Bay.

Cardiff is home to the Principality Stadium, Sophia Gardens and Motorpoint arena both in the city centre, so it’s also a great place to watch sports games and see your favourite bands.

*Although you are crossing the border into Wales, you are not leaving the UK so there are no visa/entry requirements 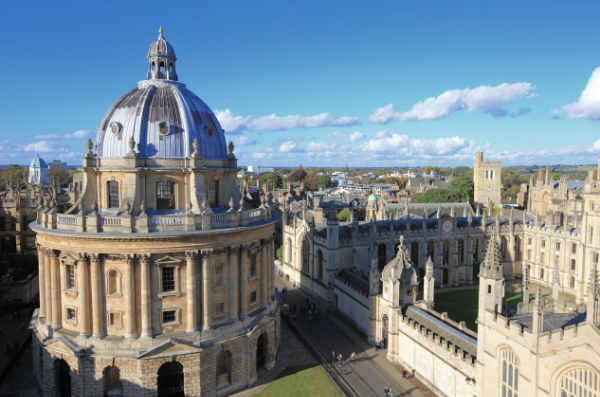 In addition to the University of Oxford  - the oldest university in the English-speaking world - Oxford is also home to some world-famous architecture, ranging from classical/Anglo-Saxon times to modern. You may recognise some of it – many films have been filmed in Oxford, including three of the Harry Potter movies! 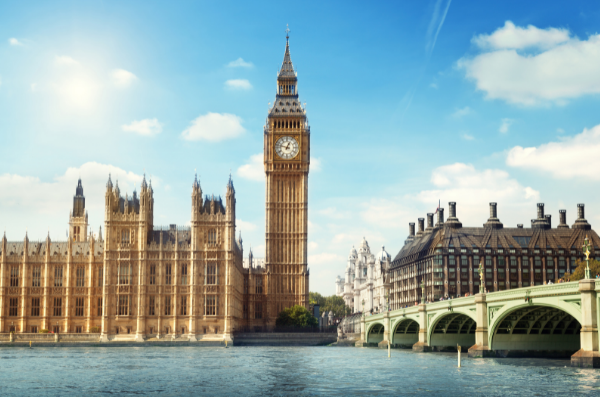 As the capital city of the United Kingdom of Great Britain and Northern Ireland (and one of the most famous cities in the world), London needs no introduction. It’s one of the most diverse, multicultural and exciting places to visit – you can explore a different part of the city on every day of the year and always find something new. 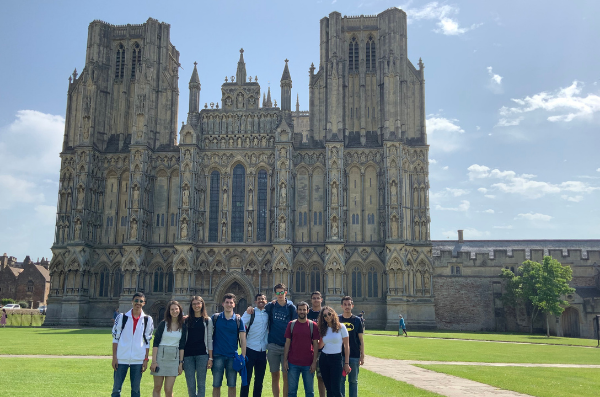 Glastonbury Tor is known as one of the most spiritual and mysterious places in the United Kingdom. The area has an extremely long and rich history; excavations have uncovered Roman artefacts and even neolithic flint tools dating back to prehistoric times! Many legends and mysteries surround Glastonbury Tor to this day. In fact, for centuries it has even been regarded as one of the possible locations of the Holy Grail!

The medieval city of Wells is close by, so it’s very easy to visit on the same day as Glastonbury. It’s the smallest city in the UK – fun fact: to be classed as a ‘city’, a place must have its own cathedral. This is why Wells is a city despite being very small, and somewhere like Reading (which is much bigger) is classed as a town!

Journey: Take the 376 Mendip Explorer bus from Bristol Coach station; it’s 1 hour and 30 minutes to Wells, then a further 16 minutes to Glastonbury. We would recommend travelling directly to Glastonbury, working up an apetite climbing the Tor in the morning then visiting Wells on your way back. 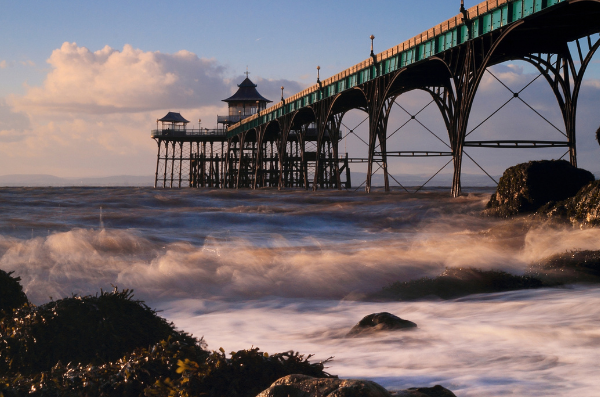 The Victorian seaside town of Clevedon is a small but charming day out; on the west, you can walk along Poets Walk for some lovely coastal views, then head back to the other end for some ice cream and a stroll along the famous pier. On the walk into town, you’ll find lots of small independent businesses, and the Curzon Theatre that has been operating since 1912 (breaking only for covid). Clevedon Marine Lake is also very popular with local swimmers – you'll find the most dedicated swimmers here on Christmas Day!

Journey: take the X6, X7 or X8 bus from X (the X6 is the quickest, at 1 hour 5 minutes). For the town centre get off at Triangle, or to get off closest to the beach carry on until Salthouse Fields. 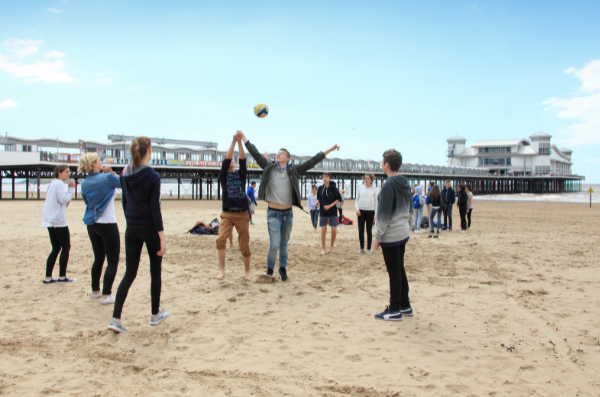 A little further down the coast from Clevedon is Weston-super-Mare, Bristol’s closest beach. With 3.2km of long, flat sands, the beach is better for walking on than it is swimming (at low tide, the sea is a 1.6km from the seafront!), and you’ll sometimes find big events taking place here in summer. After arriving at the train station, it’s a short walk through the town to the beach; from here you can easily spot the large pier. Spend some time playing the arcade games at the end of it, before sampling some fish and chips from one of the local ‘chippies’.

Journey: 32 minutes by train from Bristol Temple Meads to Weston-super-Mare, or you can take the X1 bus from the city centre which takes 1 hour and 10 minutes.

Bristol’s international airport runs flights to over 90 destinations in Europe throughout the week, and in fact it is possible to fly to and from both Paris and Amsterdam in a single day with early morning and late evening commuter flights. You may want to stay there longer, of course, but if you are limited on time it’s a great way to spend a day or weekend (if your passport/visa allows)! Make sure you bring us back a souvenir while you’re there.

A note on train travel in the UK

Coach travel tends to be much cheaper than train travel in the UK, however trains are often quicker, more frequent and therefore a bit more reliable. You can also book an ‘Open return’ train ticket, which means you don’t have to decide exactly what time you will return; you can travel on any train that’s the same journey type as your original ticket (for example, if you book an off-peak open return you can only travel back on another off-peak train, and not a peak train).

If you are travelling in groups of 4 or more, you can usually get a 30% ‘group travel’ discount when you book together.

We have shown the shortest journey times above; you may be able to take slower, regional trains for a cheaper price

IH Bristol organises Saturday trips to many of these locations – check our Social Programme calendar to see what we have planned for the coming weeks, and if you would like further advice on visiting the above cities please come and speak to us in reception and we can help you.